Inkonova are marketing a 3D printed quadcopter called Titldrone which has tilting arms.

Inkonova we have been moving forward with applications for additive manufacturing since 2011; especially with products that can be used in real life or have practical uses.

At 3DPrintWise we caught up with Pau Mallol of Inkonova to chat about what the company has been working on. The subject of quadcopters is quite technical but a fascinating one. We feel sure those interested in multirotor machines (multicopters) will appreciate what he had to say in this interview and the recently published video at the end of the article.

Pau explains: “Since mid 2014, we began getting involved with customized multirotor (e.g Multicopters, UAV, UAS or drone) machines and by October 2014 we decided to develop our own product. In particular, we detected several opportunities with multirotors which could be improved and get better performance.”

“The first product which was entirely developed and manufactured at Inkonova was a new quadcopter racer. It is a class of DIY multirotors becoming extremely popular with enthusiasts, where sizes range from about 200 to 350 mm motor to motor (diagonal). Our drone can span from 300 to 350 mm to accommodate different propellers sizes by just using longer/shorter carbon fiber or aluminium tubes.”

Editor: “I can’t pretend to be knowledgeable in this area but I understand you have innovated quite a lot on the traditional design and got heavily involved with 3D printing?”

Pau: “Yes – there are two major innovations or improvements in this new drone racer: firstly, the arms can be tilted dynamically. In other words, the arms can be tilted automatically when the pilot pitches forward or backwards to gain speed. The motors get the correct angle for forward flight while the body is kept horizontal. This is not the case with fixed-motor quadcopters which tilt the whole body by up to 45-60 degrees for the fastest miniquads. This feature of tilting the arms offers some really important benefits.”

Editor: “What are they?”

Pau: “Firstly, there is significantly less aerodynamic drag due to the smaller cross section seen from the flight direction. Both the recording and/or the first-person-view (FPV) cameras face forward instead of to the ground in fast forward speed. Also we achieve, faster acceleration as there is less mass to rotate in order to gain speed. Basically, just the arms and not the whole body.”

Editor: “It sounds impressive and I kind of understand the basic physics of wanting to reduce weight and drag.”

Pau: “The second new aspect and the one your readers will perhaps be mainly interested in is the use of 3D printing for much of the manufacturing. Until now, 3D printed miniquads which often crash at high speed have been extremely fragile and easily breakable. This is because of poor designs and the materials being used are not up to the job”. 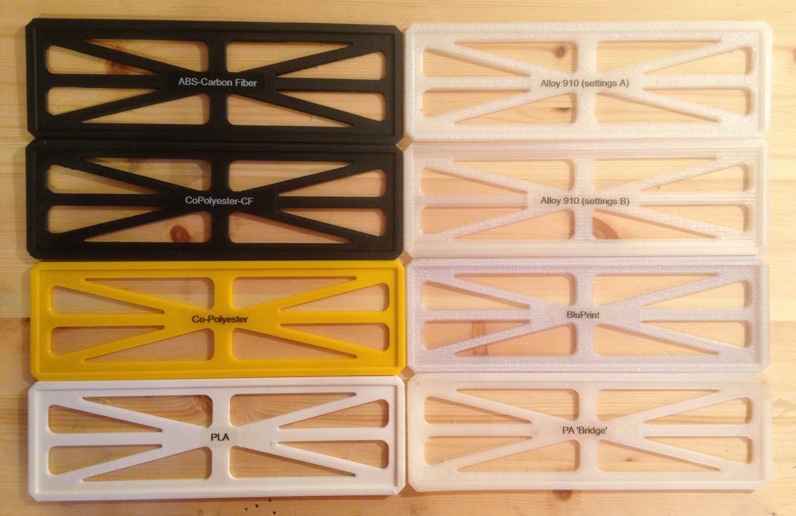 “We have already demonstrated with field tests, that this constant problem of breakages can be largely overcome. We have designed from scratch a multirotor paying special attention to creating a tough enough frame. After testing several nylon based materials from Taulman, carbon fiber blends with ABS and PLA from 3DXTech and Protopasta respectively, we found an alternative. This turned out to be a co-polyester/carbon fiber blend from Colorfabb. It has outstanding mechanical properties and the good news is it is relatively easy to 3D print with.”

“The communities in which we are involved are now experimenting with the tilting system and the control software. The results look good. In terms of 3D printing, we decided to only use only open source software and will be releasing the 3D printing files for most of the parts. We are on track to open a pre-order website and start shipments by the end of May/beginning of June.

Editor: That wraps it up but I look forward to seeing how your venture pans out. Thank you again for explaining.

Update: there is now a video release for their 3D printed drone racer and you can buy one too from their Tiltdrone store.

TILT is a new generation of quadcopter by Pau Mallol, 2015-05-13. 3D printed from carbon fibre, this is the 1st open source quadcopter for racing in the world.
More info, pictures and videos at Tiltdrone.