Fancy a 3 dimensional copy of the Brands Hatch or Monza racing circuits in a frame on your wall? Read on to get yours.

Last week, 3DPrintWise came across a very unusual application for 3D printing. One which fully demonstrates the weird and wonderful world we inhabit. It seems there are no limits to what people will design for 3D printing.

In this case, we have a designer who is 3D printing Grand Prix racing tracks and he is making a living out of doing it. Intrigued, we caught up with Jeremy; a jewellery designer from Joycomplex.com who is the creator of these novel 3D printed race tracks.

Editor: “So how did you get into making 3D printed race tracks, especially MotoGP and Formula 1 tracks? Dare I say, for an American, it’s sort of an odd choice?”

Jeremy: Really, it’s because I’m an American that I started to make these tracks. You guys in Europe are pretty lucky when it comes to motor sports. You have such a great racing culture and have so many famous tracks and GP circuits all within driving distance (at least from a driver in America’s point of view). Things are few and far between over here – at least racing tracks are.

So I guess it’s the same reason a young kid builds a model of an airplane – to be transported somewhere else. To feel closer to a place or maybe even a time. In the end, I thought it would be neat to hold my favorite tracks in the palm of my hand. After I did that, it became the tagline for the entire business. You really feel connected to the particular track when you’re holding it. It’s strange. Really, it makes you want to see a race even more, so I guess it feeds the obsession. ;-) ”

Editor: “So you just got into this because of your passion for the sport?”

Jeremy: “Yeah. I think motor sports fans, whatever their poison (F1, MotoGP, NASCAR, Rally, etc) are some of the most dedicated and passionate fans in the world. My particular passion is MotoGP. When I came up with the idea of making these tracks, all I really wanted to do were the circuits on the current MotoGP calendar. That’s how it started.”

“It got a little more serious after I showed them to my local MotoGP friends. They really dug them. I printed a few more and shared the photos on Reddit and the response was huge. That’s when I thought, I’ve got something here.” 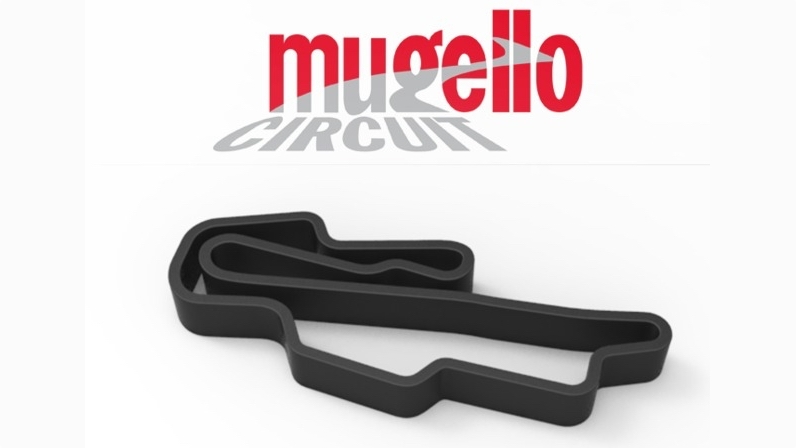 Editor: “So you started with the MotoGP calendar but I see that you have tracks from other calendars as well. How did that happen, was it just the next logical step or something else?”

Jeremy: “It was a little of both. I didn’t really think about building a business with these things. It’s still very much a hobby, though one that I hope will finance race outings. I really would like to see the tracks I’m modeling. I intended to stop with the MotoGP calendar. However, as you know, there’s some overlap with the F1 circuits and World Superbike circuits. I’d get requests from fans around the world for a specific track. I figured that I might as well just do them, and that’s what I’m in the process of doing right now. I just completed all the IndyCar tracks and intend to move on to F1 next. There are a lot of tracks out there but only one of me!”

Editor: “And then there’s the topographic tracks? The ones which really put things in 3 dimensions. Those I would imagine have been pretty popular, no? There’s nothing else out there like them.”

Jeremy: “Yeah, those are my babies so to speak. They take the longest time to design but they look so awesome when they’re done. You show a race fan one of my topographic models and their eyes light up. They study the things like drivers pouring over telemetry data. They just love looking at the elevation changes! You can see them using the sculpture to remember a particular race they saw. It’s pretty cool. And, they are popular too. I’m working on more, but I’ve been sort of sidetracked by an opportunity to build a fully licensed model of the Nürburgring.

Editor: “That will be amazing – it is over 20km long. Everybody wants to drive an Aston, Audi RS5, Caterham 7, Porsche 911 GT3 or whatever around that. It is like the number one dream for half the male population.”

Jeremy: “I’ve been in negotiations with them and hope to have things ready soon. It’s going to be cool – multiple sizes, plastic and metal models – available directly at the Nürburgring paddock and in their online store.”

Editor: “For not being a business, this sounds pretty business like. What’s your background?”

Jeremy: “I have a background in law. I was a litigator in New York for a few years before I took on a supervisory role at a boutique legal services company in Columbus, Ohio. Throughout my professional career though I was always taking part in some other “creative” activities. Not that the law doesn’t have creative aspects.”

Editor: “Thinking but saying nothing – he is kidding me isn’t he? Creative law – hmm.”

Jeremy: “I just never found myself feeling truly passionate about my work. When I wasn’t working I apprenticed with a well regarded glass artist Lorenzo Livolsi for several years. I also worked with several artists and sculptors including Dorothy Hafner and Denis Folz. Doing those things gave me the energy to commute to work and be around lawyers all day.”

“So I had this experience with the legal and business world but sort of had this secret life of an artist.”

Editor: “That’s an interesting road (excuse the pun). You got out of the rat race. How did it lead to 3D printing?”

Jeremy: “I got into 3D printing because I wanted to make a meaningful present for my wife for valentines day. I decided that I wanted to turn my voice saying “I Love You” into a pendant or earrings and went about trying to figure out how to do that. I knew I wasn’t going to learn how to cast silver and be a full fledged jeweler but I had used Shapeways to 3D print some simple plastic keychains for some friends in the past. I found a DVD that taught me how to use Rhino (a CAD software program) and slowly learned how to model objects in 3D. In the end I was able to learn enough to get what I wanted printed in silver (my Shapeways jewellery store) and the rest is history. Not to bad for only having been really doing this stuff for around 6 months!”

Editor: “Thanks Jeremy. It is so nice to hear about people doing what they enjoy and not just taking the normal route in life on that old treadmill. Makes me wonder if I should start 3D printing a kayak“.

“Before I forget, one thing crosses my mind and that is these racetracks could be very interesting for blind people, visually impaired or just those with poor eye sight. You could make them bigger and contact all the race circuit owners to have one installed on site. I have seen similar things done at cathedrals and historical sites. Not too dissimilar to making 3D printed braille”

For more information on Jeremy’s items for sale, please visit his jewellery store and of course his shop for racetracks.