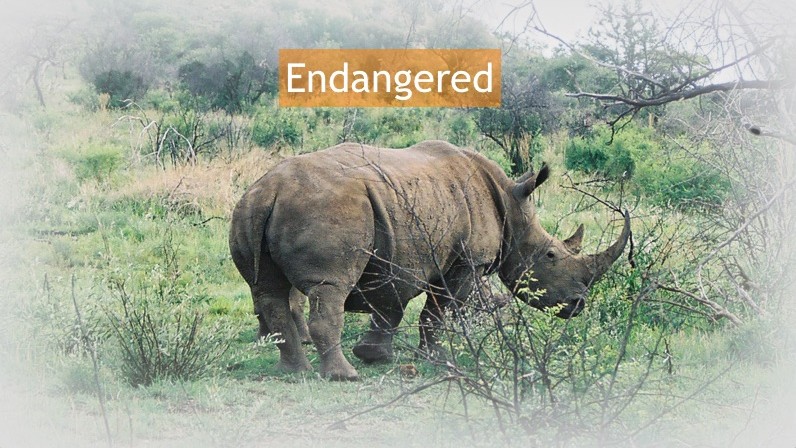 So many animals are endangered by the illicit trade in their body parts for traditional Chinese medicines.

How do we save the rhino from extinction?

For hundreds if not several thousands of years, rhinos have been slaughtered just for their horn. Exported and ground up for ancient Chinese medicines and more recently as a purported remedy to certain types of cancer or sexual dysfunction. It is a lucrative business for the criminals with prices at $60k per kilo and therefore very difficult to stamp out given the large profits involved.

The trade is so lucrative that in countries like South Africa, more than 1215 rhino were killed last year according to figures given by Save the Rhino. That was a record number and it is not looking any brighter for the future of this animal in 2015.

The trade in rhino horns has of course been illegal for some time and the push to stop it is well publicized by all of the media. In the West, great efforts have been made by governments, charities and wildlife conservationists to eliminate poaching and the trade in general. It is an abomination to most of us but unfortunately not to everyone in large parts of Asia.

Alas, prevention and policing is still a losing battle with Rhino numbers now reduced to levels not far from extinction in the wild. Heavy penalties and criminal prosecution are in place for those daring to poach rhinos but these have done little to stop the consumers of rhino horn, smugglers and those killing animals in their habitat from continuing.

A bio-engineering start-up based in Seattle called Pembient – Bioengineered Wildlife Products believe it is possible to stop the poaching. They have a strategy which targets the supply and demand of the product. They believe that it is nearly impossible to reduce the demand side of the equation. However, by flooding the market with synthetically created horn which has been bioengineered and 3D printed, the company hopes to eliminate or at least greatly reduce the slaughter of these magnificent animals.

Editor: Indeed, there are many cases where the same technology can be used to stop poaching of rare and endangered species used by Chinese medicine like tiger bones, seahorses, black bears, etc.

Pembient would argue that trying to cut demand is a forlorn hope given the authorities are trying to persuade consumers their traditions are wrong and that the product is useless for medical purposes.

The secret is in the fact that it is difficult for ordinary people to tell the synthetic material from real rhino horn. Pembient intend flooding the supply channels and marking down the price 10 times. In other words they want to create a big imbalance where it is not worth taking the risks of being involved in this ghastly trade. They can also claim purity of their product as it is not uncommon after being ground down to be mixed with substitutes from other animals. In fact it is just like the trade in narcotics.

On the other hand some conservationists are worried that this strategy may fail and indeed make matters worse.

Producing more of the rhino horn product will certainly assist in providing cover for those who continue to trade in the ‘real thing’. It could even stimulate demand for it. Neither does it address the status which comes when others around you in that culture know you have the ‘real thing’. Moreover, many would argue that education is the cure and improving knowledge should be strongly pursued. Such views would be something like;

Why are people so stupid as to think such products will cure them of fatal diseases or make men more virile? Clearly there is little basis for the belief in real science.

Nonetheless, Pembient is taking what could be considered as a practical and non-judgemental approach to this ancient Chinese culture of using their traditional medicine. It is a high risk strategy but what are the alternatives – look at the decimation of this species in every one of its natural habitats.

Editor: Agreed! When has that strategy ever worked, it isn’t working for the Rhino after many years of trying – the figures speak for themselves. It is high risk offered by Pembient but what are the alternatives?

In fact, Pembient plans to show a 3D printed horn next month – a prototype made from keratin powder and looking like a real rhino’s horn.

It may be important not to just flood the consumer market directly but the places from which Rhino horns are poached. Make it possible for those communities where poaching takes place to access the product cheaply. There is no need to make them competitors and could be counter-productive.

Charities could focus on raising money to purchase this product and in time license its production in Africa. In other words, there is no better place than disrupt the supply chain at its source.

If possible do everything to hide the fact that the product is synthetic and that it becomes difficult to distinguish (hence the 3D printing).